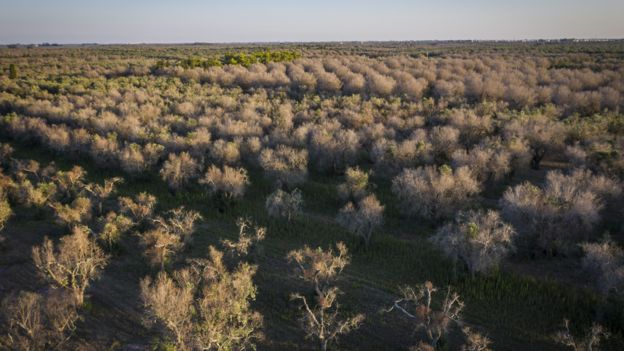 Researchers say the economic costs of a deadly pathogen affecting olive trees in Europe could run to over €20 billion.

They’ve modelled the future worst impacts of the Xylella fastidiosa pathogen which has killed swathes of trees in Italy.
Spread by insects, the bacterium now poses a potential threat to olive plantations in Spain and Greece.
The disease could increase the costs of olive oil for consumers.

Xylella is considered to be one of the most dangerous pathogens for plants anywhere in the world. At present there is no cure for the infection.
It can infect cherry, almond and plum trees as well as olives.
It has become closely associated with olives after a strain was discovered in trees in Puglia in Italy in 2013.
The organism is transmitted by sap-sucking insects such as spittlebugs.
The infection limits the tree’s ability to move water and nutrients and over time it withers and dies.

In Italy, the consequences of the spread of the disease have been devastating, with an estimated 60% decline in crop yields since the first discovery in 2013.

“The damage to the olives also causes a depreciation of the value of the land, and to the touristic attractiveness of this region,” said Dr Maria Saponari, from the CNR Institute for Sustainable Plant Protection in Italy.

“It’s had a severe impact on the local economy and jobs connected with agriculture.”

As well as in Italy, the Xylella bacterium has now been found in Spain, France and Portugal.
Tackling it at present involves removing infected trees and trying to clamp down on the movement of plant material and the insects that spread the disease.

But if these measures fail, what will be the financial impact of the infection?
In this new study, researchers modelled different scenarios including what would happen if all growing ceased due to tree death.

Read the full article by Matt McGrath via BBC News.