Dispersal ability of Neophilaenus campestris, a vector of Xylella fastidiosa, from olive groves to over-summering hosts 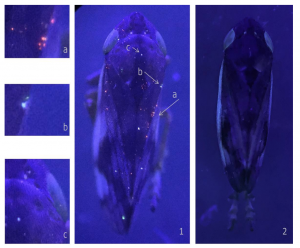 Neophilaenus campestris is one of the recently identified spittlebugs (Hemiptera: Cercopoidea) able to transmit Xylella fastidiosa to olive trees. Considering its vector ability and the wide distribution of this species in Spain, N. campestris should be considered a serious threat to key crops that are vital for Spanish agriculture such as olive, almonds and grapevines. Migration and dispersal abilities of insect vectors have profound implications in the spread of vector-borne diseases. Thus, knowledge on the dispersal ability of N. campestris is essential to model, predict and limit the spread of the diseases caused by X. fastidiosa. A mark-release-recapture technique was developed to track between-field movements of N. campestris during its late spring migration from the ground cover grasses within olive groves to sheltered areas dominated by pine trees. An indoor assay showed that the fluorescent dust used for marking did not affect the survival nor the flying ability of N. campestris. Spittlebug adults captured in olive groves at Los Santos de la Humosa (Madrid, Spain) during late spring, 2019 were dusted with four fluorescent colours and released in four different locations. Six recapture samplings were performed 23 to 42 days after release in 12 different sites located within a maximum distance of 2.8 km from the release point. Results indicated that N. campestris was able to disperse a maximum distance of 2473 m in 35 days from the olive groves to areas dominated by pine trees. Furthermore, our flight mill studies also showed that N. campestris was able to fly long distances, reaching almost 1.4 km in an 82 minutes single flight. Moreover, we carried out a survey of directional movement of potential vectors of X. fastidiosa in an olive grove located in Villa del Prado (Madrid). We used yellow sticky bands, a Malaise trap and a vertical yellow sticky net to assess the directional movement from olive groves to surrounding managed and unmanaged areas. The captures obtained in the yellow sticky bands showed that spittlebugs dispersal from the olive grove to surrounding vegetation matched with the time when the ground cover dried out. The highest number of spittlebugs was captured in the border between the olive grove and a vineyard close by. Altogether, our findings suggest that eradication measures by rooting-up X. fastidiosa-infected and non-infected trees in a radius of 100 m are of limited value because vectors are able to disperse rapidly over distances much longer than expected.