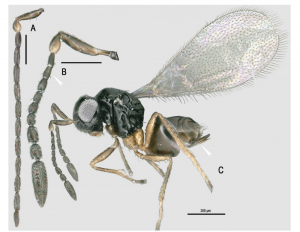 As vector of Xylella fastidiosa (Wells, 1987) in Europe, the meadow spittlebug, Philaenus spumarius (Linnaeus, 1758) (Hemiptera: Aphrophoridae) is a species of major concern. Therefore, tools and agents to control this ubiquitous insect that develops and feeds on hundreds of plant species are wanted. We conducted a field survey of P. spumarius eggs in Corsica and provide a first report of Ooctonus vulgatus Haliday, 1833 (Hymenoptera, Mymaridae) as a potential biocontrol agent of P. spumarius in Europe. To allow species identification, we summarized the main characters distinguishing O. vulgatus from other European species of Ooctonus and generated COI DNA barcodes. We also assessed parasitism rates in several sampling sites, highlighting the top-down impact of O. vulgatus on populations of P. spumarius. Based on the geographic occurrences of O. vulgatus mined in the literature, we calibrated an ecological niche model to assess its potential distribution in the Holarctic. Our results showed that O. vulgatus potential distribution overlaps that of P. spumarius. Hence, O. vulgatus appears to be a promising biocontrol agent of the meadow spittlebug in Europe and it seems advisable to conduct research on this small parasitoid wasp to assess whether it could contribute to reduce the spread and impact of X. fastidiosa in Europe.