The NPPO of Israel recently informed the EPPO Secretariat of the first record of Xylella fastidiosa (EPPO A2 List) on its territory. 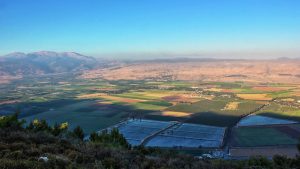 During a survey carried out in 2017-2018, a few symptomatic almond (Prunus dulcis) trees were discovered and subsequently eradicated. More recently, symptomatic almond trees were discovered in 3 adjacent commercial orchards in the Hula Valley (Northeastern part of Israel).
Symptomatic leaf samples were collected and tested in the laboratory using molecular techniques (preliminary screening for X. fastidiosa by real-time PCR and then conventional PCR identification of subspecies). Results confirmed the presence of X. fastidiosa subsp. fastidiosa.
The origin of the disease in Israel is unknown. Surveys are ongoing throughout the country to verify the absence of the disease in other areas. So far, almond trees in other parts of Israel have been surveyed and found to be free of X. fastidiosa. In the infected area, nurseries were tested and found to be free of the bacterium. Other potential hosts present in the area (Vitis vinifera (grapevine), Olea europaea (olive), Nerium oleander, and Prunus spp. other than almonds) were also found to be free from X. fastidiosa. All Cicadomorpha (including Cicadellidae) from the infected orchards were collected by both net sweeping and sticky traps. To date, no insects have been found to be infected with the bacterium. Awareness-raising meetings have been carried out with the Israeli almond growers’ board, and nurseries have been informed.

The pest status of Xylella fastidiosa in Israel is officially declared as: Present: in one area only, under containment.