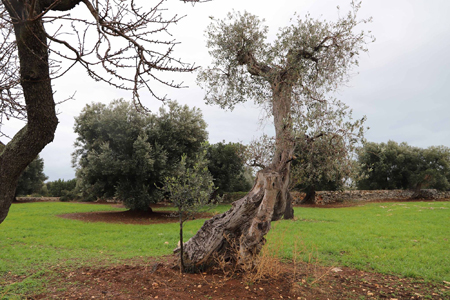 The bacterium was detected by serological and molecular tests in an olive tree sampled in the framework of the current monitoring campaign (2018/2019).
The tree is located in the province of Bari, in a Xylella-free territory, although very close to the border of the current buffer zone (approx. 120m distant). An in depth survey of all host plants within the 100m radius of the infected plant has been immediately started, which will be followed by the demarcation of the buffer zone.

Genetic characterization of the bacterial isolate, confirmed it harbours the genotype ST53, the same and, so far the only one, found associated to the infections occurring in the southern part of the Apulia region (in the demarcated areas), causing severe epidemic decline on olive trees.
This outbreak is approx. 120 km North from the first Xylella-outbreak detected in Gallipoli in 2013.