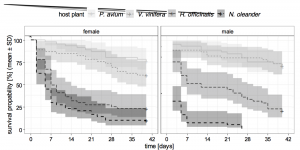 The most likely scenarios for Xylella fastidiosa introduction in Central Europe is through infected ornamental plants, with a successive spillover from gardens and parks to cultivated orchards. Given its polyphagy and wide distribution, the meadow spittlebug Philaenus spumarius, the only ascertained vector of X. fastidiosa in Europe so far, might play an important role in such a scenario. Here, we combined and analyzed spittlebug’s behavioral data obtained through Electrical Penetration Graph (EPG), preference and survival tests as well as eld surveys, in order to infer possible bacterium patterns of spread. For our case study, we selected oleander and rosemary as potential introductory hosts and grape- vine and cherry as economically important threatened plants. Philaenus spumarius was collected in eld near all the four plant species, although choice and no-choice tests indicated that the spittlebug rather prefers to settle on cherry and grapevine than on rosemary and oleander. Considering the results of the EPG, the duration of xylem sap ingestion was longer in cherry, grapevine and rosemary than in oleander. However, P. spumarius spent on rosemary most of the time in resting activities, this implying a lower duration of xylem sap ingestion compared to grapevine and cherry. Overall, our data suggest that cultivated plants as grapevine and cherry could be more relevant than oleander and rosemary as X. fastidiosa source plants; therefore, P. spumarius might acquire the bacterium from cultivated plants, then first spread it within cultivated orchards, and successively to ornamental plants during its dispersal.