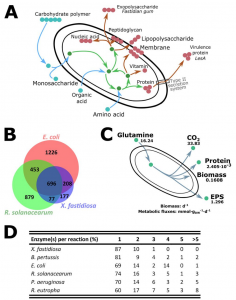 High proliferation rate and robustness are vital characteristics of bacterial pathogens that successfully colonize their hosts. The observation of drastically slow growth in some pathogens is thus paradoxical and remains unexplained. In this study, we sought to understand the slow (fastidious) growth of the plant pathogen Xylella fastidiosa. Using genome-scale metabolic network reconstruction, modeling, and experimental validation, we explored its metabolic capabilities. Despite genome reduction and slow growth, the pathogen’s metabolic network is complete but strikingly minimalist and lacking in robustness. Most alternative reactions were missing, especially those favoring fast growth, and were replaced by less efficient paths. We also found that the production of some virulence factors imposes a heavy burden on growth. Interestingly, some specific determinants of fastidious growth were also found in other slow-growing pathogens, enriching the view that these metabolic peculiarities are a pathogenicity strategy to remain at a low population level.

Xylella fastidiosa is one of the most important threats to plant health worldwide, causing disease in the Americas on a range of agricultural crops and trees, and recently associated with a critical epidemic affecting olive trees in Europe. A main challenge for the detection of the pathogen and the development of physiological studies is its fastidious growth, as the generation time can vary from 10 to 100 h for some strains. This physiological peculiarity is shared with several human pathogens and is poorly understood. We performed an analysis of the metabolic capabilities of X. fastidiosa through a genome-scale metabolic model of the bacterium. This model was reconstructed and manually curated using experiments and bibliographical evidence. Our study revealed that fastidious growth most probably results from different metabolic specificities such as the absence of highly efficient enzymes or a global inefficiency in virulence factor production. These results support the idea that the fragility of the metabolic network may have been shaped during evolution to lead to the self-limiting behavior of X. fastidiosa.