Researchers in XF-ACTORS from IVIA and IPSP-CNR have recently published in the journal Frontiers in Plant Science an epidemiological study of Xylella fastidiosa distribution in Alicante, Spain, and Apulia, Italy. 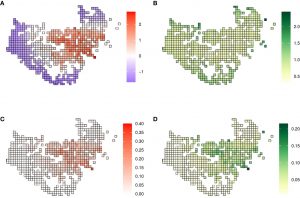 The effects of climatic and spatial factors on the geographic range of X. fastidiosa in these two infested regions in Europe were studied. Data from the official surveys in the demarcated areas in Alicante (2017) and Lecce (2013-2014) were analyzed with different statistical methods, according to the type of data in each case. In both regions, the spatial structure had a strong influence on the models, but not the climatic covariates.
The distribution of the pathogen was largely defined by the spatial relationship between geographic locations. This implies that the areas close to positive findings of X. fastidiosa are more likely to be infested than those farther away. The results also indicate that climatic factors are not likely to prevent the colonization of neighboring areas by X. fastidiosa. Therefore, control measures should be enforced to limit further disease spread.
The spatial models developed in this study will also assist risk managers in designing more efficient surveillance strategies, where inspection and sampling efforts would be adjusted considering the probability of X. fastidiosa presence. Following open science principles, data and code of the models have been made available for reproducibility and replicability.